Skip to content
Here is an article by Shakira Sison that is important for all young people to read so they know exactly what really happened under martial law, what the true cost of human suffering was. Maybe your families were the lucky ones. Maybe your families made money through the corruption of the Marcos regime. Maybe your family is Ilocano and intensely loyal to Marcos a fellow Ilocano.
These are not the obfuscations, fabrications and outright lies that the Marcos family have been feeding you since 1986 to rewrite their terrible history. These are true stories which can be multiplied across the country thousands of times.
Martial law was a shocking and brutal era, make no mistake. It was a time of fear, mistrust and betrayals. And for what purpose? All for the glorification of the Marcos family. Those of you who voted for Bong Bong Marcos should be ashamed of yourselves. It truly shows that you have not done your research, that you have turned a blind eye to the truth and that you have closed your ears to the cries of those  hundreds of thousands who were raped, tortured, kidnapped and murdered. Shame on you!

It’s convenient to look at the past with rose-colored glasses instead of with memories of needles in your nail beds, electric wires attached to your genitals, and the barrel of a gun thrust inside your mouth.

The majority of comments on articles about Martial Law seem to be from staunch defenders of that era. There are and will always be citizens who see those years as an era of peace and prosperity in our country.

We don’t need to debate that. Instead we simply need to tell, retell and listen to the stories of those who survived those years. As the younger generation we need to do our own research, take the blinders off our eyes and learn what exactly life was like during Martial Law before coming up with flowery images of those years as a beautiful moment in history.

You would never have seen an article such as this as I would have already been taken, tortured, and killed for my opinions. If Martial Law were still in effect, bloggers who wrote anything even remotely critical of the government or its cronies would be jailed like they do in other countries.

There would be none of your Facebook rants about the administration, Metro Manila traffic, or even the outfit a politician is wearing. In fact, there wouldn’t be Facebook, Instagram, and Gmail in the Philippines the way these websites are banned in China.

If I wrote during Martial Law, I could be taken from my home the way 23-year-old Lily Hilao was for being a prolific writer for her school paper at the Pamantasan ng Lungsod ng Maynila. In April 1973, Lily was taken by the military, and was raped and tortured in front of her 16-year-old sister. By the time Lily’s family retrieved her dead body, it bore cigarette burns on her lips, injection marks on her arms, bruises and gun barrel marks. Her internal organs were removed and her vagina was sawed off to cover signs of torture and sexual abuse. Liliosa Hilao is considered to be the first female casualty and martyr of Martial Law.

Martial Law engineer Juan Ponce Enrile defined subversion during a 1977 BBC interview: “anybody who goes against the government or who tries to convince people to go against the government – that is subversion.” Proclamation 1081 gave the military the authority to arrest, detain, and execute anyone who even dared to breathe sadly about the Marcos administration.

Archimedes Trajano was only 21 when he questioned Imee Marcos on why she was the National Chairman of the Kabataang Barangay during an open forum. He was forcibly taken from the venue by Imee’s bodyguards, and was tortured and thrown out of a building window, all because the presidential daughter was irked by his question.

Maria Elena Ang was a 23-year-old UP Journalism student when she was arrested and detained. She was beaten, electrocuted, water cured, and sexually violated during her detention.

Dr Juan Escandor was a young doctor with UP-PGH who was tortured and killed by the Philippine Constabulary. When his body was recovered, a pathologist found that his skull had been broken open, emptied and stuffed with trash, plastic bags, rags and underwear. His brain was stuffed inside his abdominal cavity.

Boyet Mijares was only 16 years old in 1977 when he received a call that his disappeared father (whistleblower and writer Primitivo Mijares) was still alive. The caller invited the younger Mijares to see him. A few days later, Boyet’s body was found dumped outside Manila, his eyeballs protruding, his chest perforated with multiple stab wounds, his head bashed in, and his hands, feet and genitals mangled.

Trinidad Herrera was a community leader in Tondo when she was arrested in 1977. In this video she recounts being electrocuted on her fingers, breasts, and vagina until her interrogators were pleased with her answers to their questions.

Neri Colmenares was an 18-year-old activist when he was arrested and tortured by members of the Philippine Constabulary. Aside from being strangled and made to play Russian Roulette, he witnessed fellow detainees being electrocuted through wires inserted into their penises, as well as being buried alive in a steel drum.

Hilda Narciso was a church worker when she was arrested, confined in a small cell, fed a soup of worms and rotten fish, and repeatedly gang-raped. 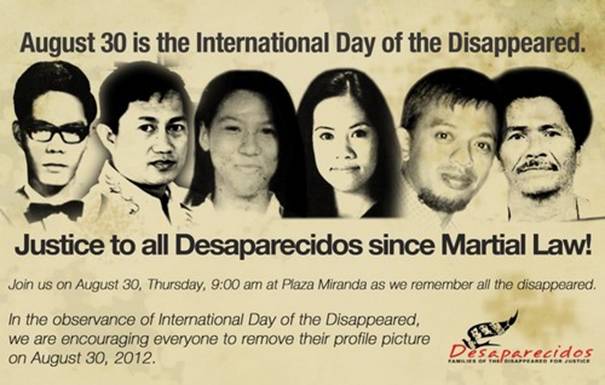 60,000 were arrested during the first year of Martial Law alone, and many of their stories will never be told. Michael Chua wrote a paper detailing the torture methods used during the Marcos regime.

Aside from electrocution of body parts and genitals, it was routine to waterboard political prisoners, burn them using cigarettes and flat irons, strangle them using wires and steel bars, and rub pepper on their genitals. Women were stripped naked, made to sit on ice blocks or stand in cold rooms, and were sexually assaulted using objects such as eggplants smeared with chili peppers.

Forty-three years have passed. Time, as well as the circus that is Philippine governance make it easy to forget Martial Law as the darkest and most terrible moments in Philippine history. Many of its victims have died or have chosen to remain silent – silence being most understandable because these stories are truly difficult to remember, and much harder to tell.

Stories need to be told

Yet these horrific stories need to be told over and over until we realize that the pretty cover of the book of the Marcos years is actually full of monster stories. We need to bring the graphic accounts of torture and murder to light so that those who rest comfortably in their illusions that the Marcos years were pleasant will at least be stirred.

Instead we often hear from those who want to erase the evils of the past, those who tell us that these young people, many of them barely past their childhoods when they were tortured and killed, were violent rebels who sought to overthrow the government. Never mind that it was one of the most corrupt and cruel dictatorships the world has ever known, and that it was by the efforts of these young heroes that the reign of the Marcoses ended.

Majority of Martial Law victims were in their 20s and 30s at that time – the same age our younger citizens are now – those who have the luxury of shrugging off the Marcos years as a wonderful time. Unscathed by a more cruel past, the younger generation is only too eager to criticize the current state of our government and our people as being undisciplined and requiring an iron fist such as the one Marcos used to supposedly create peace in the past.

They forget that if we were still under Martial Law (or should it return), such sentiments of “subversion” could cost them their lives, and that the same freedom and voice they use to reminisce about a time they know nothing about would have been muted and extinguished if we did not have the democracy we enjoy today.

Hindsight is always 20-20, as they say. It’s convenient to look at the past with rose-colored glasses instead of memories of needles in your nail beds, electric wires attached to your genitals, and a barrel of a gun thrust inside your mouth, the way thousands of Martial Law victims suffered and still suffer to this day.