Skip to content
I am reposting this as it fits quite well with my own articles on the Marcoses and the wealth they accumulated during their 21 year rule. Some of you may have read this before. Others may be reading it for the first time. For the latter group it will be an eye-opener, a revelation of just how much the Marcoses stole from the people of the Philippines.
When Marcos fled the Philippines in 1986, he tried to bring as much of it with him as he could.

Booty and the Beast 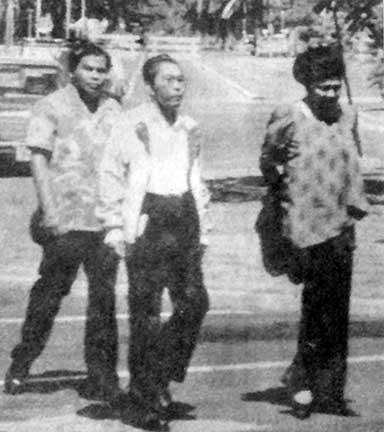 Ferdinand and Imelda (with bodyguard) in Honolulu, 1986
by  Alan Robles
Frequent travelers can pick up a few tips from the Marcoses: given very short notice of a sudden departure, they were able to pack and bring along 300 crates of loot to Hawaii. Of course, not every frequent traveler gets to be ferried on Air Force cargo planes courtesy of the US government.
Unfortunately for the Marcoses somebody forgot to tell them that there would be a Customs inspection at Hawaii. US officials soon got at the plane truth and very quickly the boodle which Ferdy and Meldy had brought along was no longer hidden wealth — it was all very visible.
Among the things the inspectors found were 408 pieces of jewelry, valued at about $10 million. They included a bracelet and earring appraised at $1.5 million. An inventory of the 300 crates included:
Perhaps if the Marcoses had had a bit more time — and a cargo ship — they could have brought along what they left in Malacañang Palace: 2,142 pieces of jewelry, 508 gowns, 427 dresses, 71 pairs of sunglasses and those by now immortal shoes of Imelda, 1,060 pairs of them. There were also 75 filing cabinets of documents and three paper shredders that had broken down from overuse.
It turned out that Ferdinand Marcos was a forgetful traveler because among the documents left behind were details of kickbacks and commissions (plus receipts for thousands of dollars of flowers bought by Imelda), and a “declaration of trust” that strongly bolstered the Philippine government’s corruption case against the dictator.

So let that be a lesson: when you pack for a sudden trip, always have a checklist.

At that moment, the presidential pilots had deserted the Palace.
A number of the Presidential Security

Command personnel had changed their uniforms into civilians and disappeared without a word.

Even General Ver started to go around his officers to bid them goodbye, although it was not exactly

clear why he was saying goodbye to them.

Plans were not firmed up until the early evening of Feb. 25.  Marcos wanted to go to his home base in Paoay, Ilocos Norte.  But Cory Aquino was adamant in her decision that he should go on exile inthe United States.  It has become a standard joke among Filipinos that the American pilot, who manned the US plane that took the Marcoses to the US, misjudged Marcos’s request to take them toPaoay and instead, flew them to Hawaii.

By 10 pm, a helicopter picked up the Marcos and Ver families in Malacanang and took them to Clark Air Base in Pampanga. From there, a US plane took them to Hawaii for the awaited exile. Marcos spent his last days there as a sick man and a political has-been.

He died there in 1989. Meanwhile, a new government took over to start the arduous and tortuous journey to restore democracy in the country.

6 thoughts on “Booty & The Beast by Alan Robles”