“Following the recent horrific conflict in Kosovo, the majority of the country’s hospitals and medical centres have been either seriously incapacitated or wilfully destroyed.” explained Professor Jim Ryan, head of the Leonard Cheshire Centre of Conflict Recovery. “Looting by armed civilians has also taken place on a massive scale and departing Serbian medical personnel have removed any portable medical equipment and demolished everything that was too bulky or too heavy to carry with them!”.As a departing act of vengeance, he told me, the Serbs even flushed all existing in-date drugs and medicines down the toilets.

Professor Ryan has recently returned from a four week visit to Kosovo as the International Advisor in Trauma and Emergency Services, part of an international medical team, deployed by the Department for International Development (DFID), to help restore the main 2400-bed University Teaching Hospital in the capital Pristina. 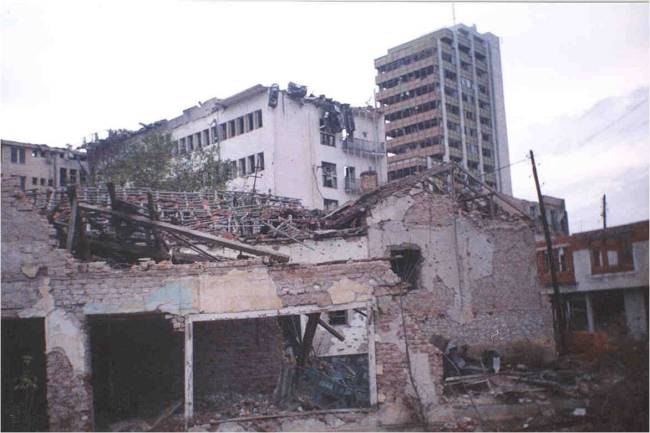 Since the Bosnian war of 1991 up until Nato forces entered the country early this summer, there had been an orchestrated campaign in Kosovo, by the Serbian government, not only to remove, often at gunpoint, any prominent or professional Albanian from his place of work but also to completely eliminate all traces, documents, or references to those persons ever having existed. All files and computer records from businesses, utility companies, law courts and any other organisations and institutions holding any information about the local Albanian population were systematically erased. “As a consequence,” Professor Ryan explained, “no Albanian has held any professional job in any capacity, medical, legal, academic, civilian, or military for the past nine years.”

Professor Ryan continued, “Today this has led to a critical problem, particularly within the health service, since it means that no Albanian doctor, surgeon or nurse has had any hands-on medical experience for almost ten years. They are totally out of touch with current medical practices and desperately require re-training.” Recognising this need, DFID decided to make its flagship project within Kosovo the restoration of Pristina’s main hospital by providing up-to-date departments in Obstetrics, Pharmacy, Physiotherapy, Trauma, Orthopaedics, Neuro-Surgery, General Surgery, Internal Medicine, Primary Care, Paediatrics, Anaesthetics, ENT, Pre-Op, Post-Op and Intensive Care..

Professor Ryan, who is in charge of setting up the Emergency Centre, the first of its kind in Kosovo, has no reservations about this impressive project – “ It is immense. It is very long-term but it is extremely worthwhile” he told me,  “In the end they will have a fully-equipped modern hospital with state of the art facilities and equipment and a team of highly trained personnel running it.”

However, the personal dangers facing any deployed medical staff, from the UK and other countries, are very real. To illustrate this, Professor Ryan told me, “I was approaching the entrance of the hospital on my first day and I unconsciously stepped off the path onto the grass verge by the steps leading up to the main door. Suddenly I heard a collective intake of breath ….and then someone shouted to me to get off immediately !” Professor Ryan did as he was told. He discovered later that, although the lawns facing the hospital had been cleared of mines, the grass verge surrounding its perimeter had not yet been checked.

Landmines, booby traps, falling masonry, unexploded bombs and the anger of vindictive Serbs are not the only dangers the international team faces. The hospital is guarded, day and night, by armed guards, both Nato, consisting mainly of Italian carabinieri, and local Albanian police. Deployed Army medical staff too, including nurses, carry out their work with pistols on their hips or assault rifles slung over their shoulders, with strict orders to use them, when necessary, to protect and defend both their patients and themselves. The chances of an unforeseen and unwelcome accident happening under these circumstances cannot be underestimated.

Added to this is the inconvenience caused by the tight restrictions imposed on the team’s movement and travel. The deployed team is not permitted to venture far from the hospital and their accommodation. Nor is it allowed out after dark, even in an emergency, as it is considered far too risky. Thus, at night, a curfew prevails and the hospital is manned solely by local staff.

Electrics, too, present a major handicap since they are almost non-existent. Electric power is spasmodic, mostly not working at all and there are no generators. “When a generator was finally obtained and installed in the hospital,” Professor Ryan said, “I asked Harry, the hospital’s odd-job man, what would happen if we switched on all the lights at the same time. Harry simply shrugged his shoulders and said, “maybe it’ll go BOOM!””

Professor Ryan is hoping that, despite all the problems, difficulties and obstacles likely to be encountered by the international team during the restoration of the hospital, the Emergency Centre will open on schedule and be ready to receive its first surgical and trauma cases by the middle of October.

“It is hoped, too,” he told me, “that, over a matter of months, we will have identified and trained local Albanian staff, to a very high level, in modern emergency medical techniques and in the use of related equipment as it will be they who will be left in charge of the Centre once the team has left.”

Caroline Kennedy is Overseas Co-ordinator for Leonard Cheshire International for their programmes in Azerbaijan, Kosovo and Bosnia